Plastic waste is everywhere — disposable coffee cups, food containers and egg trays. But the existence of foam may end soon in many cities worldwide under legislation, which is proposing the most extensive ban on the plastic product. Scientists said that plastic is an environmental and public health pollutant, and people have to reduce its use.

In the contemporary society, people are relying on the benefit and conveniences that plastic products bring. However, while these products save people many time to do other things, people usually throw them away after use. In this condition, the problem of white pollution is getting more serious. And unfortunately, plastic products can’t degrade by themselves when they are deeply buried under the ground. The progress of degrading will cost hundreds even thousands of years, especially for polystyrene products.
Waste foam containers are always thrown away by people. This results in the serious damage of the environment. However, in fact, people should be aware of the importance of protecting the environment.
So many cosmopolitans have banned the use of plastic bags and polystyrene food containers or foam coffee cups. Some of these cities have developed a strong proposal demonstrating the city's ability and willingness to capture foam polystyrene. President of the Food Service Packaging Institute, said that they are pleased to support the expansion of a recycling program which serves the residents.
Polystyrene products can be used to wrap the package, decorate the cars and pack the electronic appliances. Styrofoam can be used to make disposable coffee cups and food containers. In the most of the occasions, people throw away the used packages and containers, therefore, a lot of EPS waste are produced every day.
Polystyrene products is everywhere in people’s daily lives. Instead of throwing the waste away, people can collect and classify them for recycling. Many companies and communities have applied recycling machines to turn these waste plastic into renewable useful things. This method not only can save the recycling cost, but also can arise people’s awareness of environment protection.
Compactor is one of the recycling machines. It can compress polystyrene foam, collected waste foam both, then make them into highly dense blocks which can be turned into new products such as picture frames and decorative products. 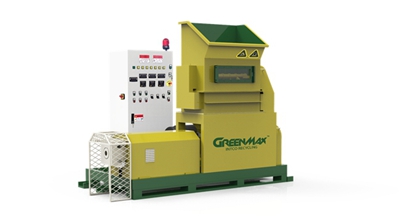