Shanghai Intco Industries Co. Ltd. was established 20 years ago in the United States as a trading company, but now is based in China and claims to be one of the world's largest recyclers of polystyrene waste. 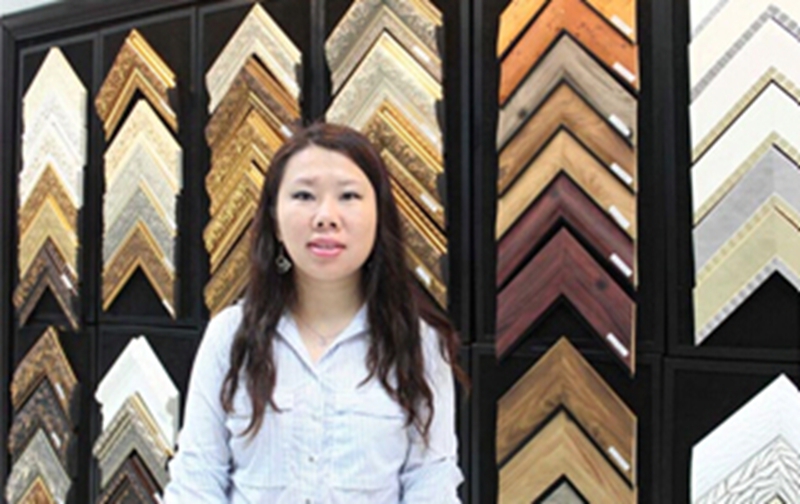 Every month almost 5,000 tons of expanded and extruded PS comes to Intco's three facilities, in Shanghai, Shandong and Anhui.

The end result? Picture frames.
Founder Frank Liu began his scrap recycling and manufacturing business when he returned to China. The technology was developed in the United Kingdom using virgin PS, and a South Korean company invented the process of using recycled PS instead. Intco claims to be the first company in China to use the technology.

For Intco, the process starts in countries around the world where PS is collected and compacted into blocks. Intco pays up to 40 cents per pound for the best quality material (depending on quality and location), which it ships to China and extrudes it into long profiles.

The finished product is sold under the brand name Greenwood.
When the company opened its first factory in Shanghai in 2001, more than 90 percent of its products ended up in Wal-Mart, Michaels and Target stores in the United States. But as other global markets are growing, the United States now accounts for 60 percent of its sales, with Europe right behind.
Mia He, sales administration supervisor for Greenwood Products, says sales have been growing 20-30 percent per year for more than five years. Each month, Intco loads up 400 40-foot long shipping containers worth of products to be sent to global markets, netting the company 2013 sales of US$150 million.

The company is expanding its end product market and beginning to manufacture garden barriers and furniture, but they are faced with one big problem, says Lucy Shen, Intco's EPS recycling global manager: scrap PS is hard to come by.

The company is buying as much scrap as it can, but it's still not enough to feed the growing company. Currently its biggest source supply is from Japan, which sends 2,000 tons a month. Europe sends another 1,000 tons. The United States sends only 500-600 tons per month, Shen said.

"Now everything is limited by the amount of raw material," Shen said. So the company is constantly trying to find new sources, and even began selling its own line of Greenmax-brand compactors and recycling systems to ensure a steady flow of scrap PS.

Her goal? To keep PS out of landfills and make sure that recycling it is accessible to more people in underutilized sources like the United States.

She blamed a lack of awareness, a shortage of facilities that can handle PS foam, and the absence of government support for PS recycling as the reasons for the relative lack of suppliers in the United States.

"If the government could give support like an allowance or funding [to scrap collectors], it would be better," she said.

There are signs that things are improving, partly due to Intco's pushing its Greenmax systems everywhere from recycling trade shows to seafood companies. "We have to train people to start this project, to buy our machines or our competitors' machines so that in the future we can buy the [PS] blocks from them," Shen said.

There's one source that Intco does not deal much with, and that is mainland China. Shen says no one in China wants to invest in the machinery to recycle the PS.

"It's very, very expensive," said Shen, pointing to machines that sell for US$30,000 to US$40,000. "Our only Chinese clients are government companies."

While China hasn't developed as a source, it is growing as a market for end products. In 2009 the company started a team to target the local market.

Moving forward, the company sees automation as an important direction to move in. Its largest factory in Shandong employs more than 2,000 people.

"We want to install more automatic equipment," Shen said, "to replace the manpower." It's not just rising labor costs that are forcing them in this direction, she says, but also the lack of labor. "All factories are having this problem now."

Intco is doing great business taking what most people see as useless trash and turning it into expensive-looking interior decoration products. Perhaps the ruse is too good. Even with how developed the market is for Intco's products, Shen says she's still amazed at how little knowledge there is about EPS reuse. "Few people know that EPS can be recycled and made into frames," says Shen. "We hope that more EPS can be reused."